The Coral Gables Art Cinema opened in October of 2010, founded by Steven Krams, an avid film enthusiast and artifact collector. One of the Cinema’s missions is to push film forward and recognize it as an art medium. Although the Coral Gables Art Cinema was closed temporarily due to the pandemic it has been open, with COVID-19 safety restrictions, since September 2020. The cinema strives to cater to a variety of demographics. They frequently show art films, independent movies, and foreign films along with hosting director conversations after movie showings. The Coral Gables Art Cinema also shows movies that appeal to young adult audiences through their After Hours screenings. 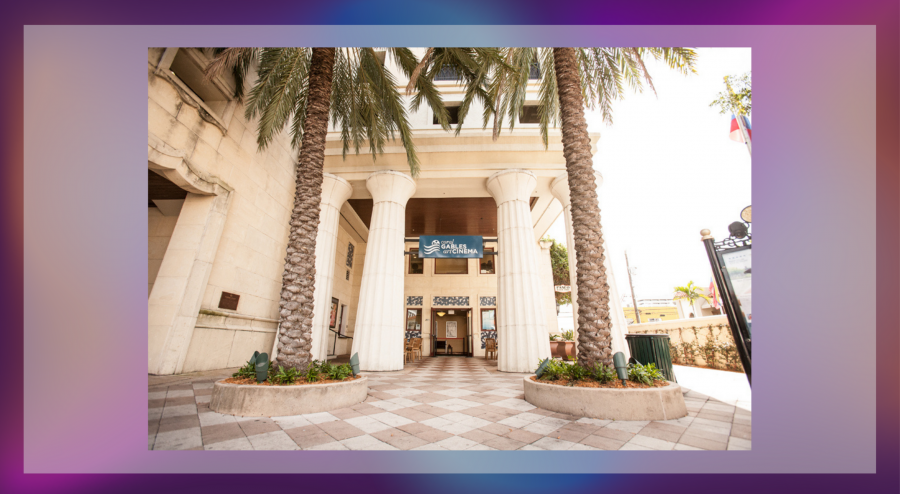 The Coral Gables Art Cinema is located at 260 Aragon Avenue, directly across the street from Books & Books. It is one street north of Miracle Mile, between Ponce de Leon Boulevard on the east and Salzedo Street on the west. There is a covered garage with parking immediately next door to the Cinema. Parking validation can be acquired through scanning your parking ticket in the Cinema’s lobby, as they offer 50% off the first three hours of parking.

Upon entering the Cinema, visitors will find themselves in the lobby, where they can purchase concessions and movie posters that are displayed around the Cinema for $5. Concessions include packaged snacks and popcorn, in addition to bottled/canned drinks and alcoholic beverages. The handicap/wheelchair elevator allows access to back rows of theater, in addition, assistive listening headphones are available for all films. The devices are available at the concession stand free of charge.

Within the theater, seating is blocked off around each reserved seat to abide by social distancing regulations. The current average crowd size is 30-35 even though the theater usually seats 141 people. Masks are allowed off only while seated and eating and must be worn at all other times. There are sanitizing stations both in the lobby and within the theater, and the bathrooms are located on the second floor, accessed via elevator in the lobby.

The founder of the Cinema, Mr. Krams, frequently rotates the artifacts from his personal collection to display on the second floor. Some of the items include antique film cameras, record players and other devices. An extension of the collection, a vintage black and white photography camera, and a newer film camera can be found in the theater on the first floor flanking the big screen.

Although being a lead projectionist seems like a dream come true for some movie fanatics, the truth is you will rarely ever have time to watch the movie. Mr. Junco, as the lead projectionist at the Coral Gables Art Cinema, knows this well. After all, being the man behind the movie magic comes with a lot of responsibilities.

Mr. Junco builds the schedule for movie screenings which include deciding what trailers to play at the beginning of the film, making sure that audio levels are kept consistent throughout the movie, and controlling the light levels before, during, and after the movie screening.

When it comes to digital films, he is tasked with copying digital film off a hard drive onto a computer with the software necessary to play them. The real workout comes in when he plays films on celluloid. Hooking up a 70mm film reel onto the top cog of the projector is no easy feat, as we soon learned.

BEHIND THE SCENES WITH CULTURE SHOCK MIAMI - PROJECTIONIST BOOTH

The Coral Gables Arts Cinema is the only movie theater in South Florida that plays 70mm film on traditional projectors. The vintage projector that the Cinema uses to show 70mm films is used on special occasions, usually to play epics, such as Hamlet (1996) and 2001: A Space Odyssey. More frequently, the Cinema also shows films on 35mm. Javier Chavez, Associate Director at the Coral Gables Art Cinema, was able to give us an exclusive look into what goes on in the projectionist’s booth.

To play a 35mm or 70mm film, the projectionist must play reel to reel, meaning that they must manually thread film through a complicated series of mechanical cogs into the projector. One reel of 35mm film plays about 15-20 minutes before it needs to be seamlessly switched to the next one. The projectionist must keep an eye out for three small cue marks in the upper right hand corner of the screen to time the switch. We learned that this is an incredibly difficult process, as if the projectionist does not get the timing perfectly for each reel, the audience will become aware of skips within the film instead of continuous projection. Depending on the film being shown, there may be anywhere from 5+ reels to be switched out, making a projectionist’s job very active. For 70mm film, the play time of each reel is even less, but the reels themselves are larger, which makes switching them out extremely labor intensive. Combined with the fact that 70mm films shown at the Cinema are typically 3+ hours long…. well you can imagine that the projectionist is kept very busy for these showings.

The next time you watch a 35mm or 70mm film that finishes off without a hitch remember that behind every great movie playing is a skilled projectionist in the projection booth making it all happen! 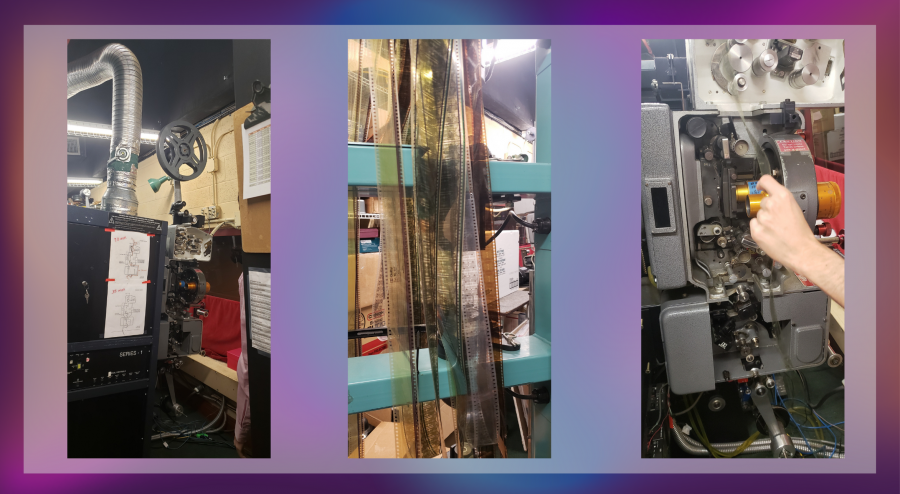 This was my first time visiting the Coral Gables Art Cinema and getting the opportunity to visit the projection booth and learn about everything involved in showing films was a really cool experience. The Cinema is a non-profit film art organization that is genuinely passionate about showcasing films that are not typically found in other theaters. I think that this allows visitors to truly experience film as an art form, and also explore different perspectives that they might not otherwise get to see. Watching an international film in a theater setting is what I am really excited to experience for my next visit to the Cinema.  After learning about all the work that goes into projecting film movies, I cant wait to watch one for myself (and maybe try to guess when the reels change)!

We end this blog post with a hopeful message for movie goers from Javier Chavez, Associate Director at the Coral Gables Art Cinema:

“2020 has shown us how much we take for granted certain things like going to the movies and watching a great film with an audience. I hope that once we’re able to vaccinate everybody and things get better in this country, people will flock back to the movies.

There is nothing like sitting in a large auditorium in a darkened room with a bunch of strangers coming together to experience this work of art that is on the big screen, and I think that is a very special thing. It’s very unique to the medium of film and as an exhibitor that’s what I strive to do, to give people an opportunity to come together and share in this unified experience. I think that’s what film is about and so hopefully people will come to the cinema once they’re ready to share in that experience.”

Remember to check out the current showings at Coral Gables Art Cinema and check the Culture Shock Miami website for $5 tickets for ages 13-22!